This 8 Days Serengeti Wildebeest Migration Safari is the most ideal safari tour for watching the great wildebeest migration based in Northern circuit of Tanzania giving you the opportunity to visit beautiful different National Parks, each one having its own distinctive features and attractions. 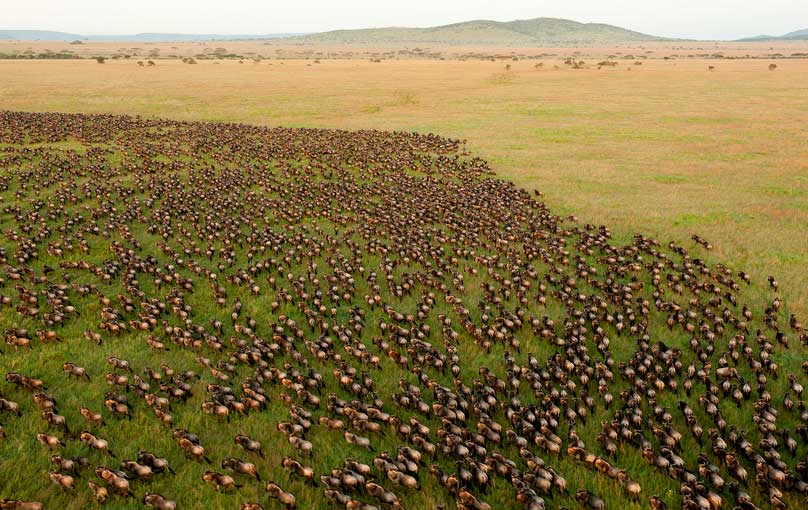 The tour starts with lunch in Arusha town at 12:30pm. After lunch at around 14:00pm is you met by our professional tours guide/driver, who will deliver a short safari info briefing, after which, we travel west to the Great Rift Valley and the Lake Manyara National Park. Dinner and overnight in the Lake Manyara Wild Life Camp

After breakfast we will drive through the agricultural and fresh produce market town of Mto WA Mbu, which is situated next to the entrance of the Lake Manyara National Park. The town is a souvenir hunters paradise, harbouring thousands souvenir salesmen – ready to pounce at your slightest invitation. Lake Manyara National Park is one of Tanzania’s most dramatically located wildlife areas, consisting of a shallow soda lake (covering two-thirds of the park), located at the foot of the Great Rift Valley’s western escarpment. The park’s varied habitat attracts a wide variety of animals, including one of Africa’s largest concentrations of Elephants; Manyara is famous for a Tree-climbing lions, as well as large flocks of Flamingos, attracted by the algae in the lake.
We will enjoy lunch before we head towards the Serengeti National Park via the beautiful high lying farmland of Karatu and the Ngorongoro Conservation Area. Leaving the highlands behind, we descend into the heart of wild Africa with endless plains, which roll into the distance as far as the eye can see. We spend 3 days in this incredible untamed wilderness of the Serengeti National Park, where literally millions of animals roam. We will enjoy a late afternoon game drive en route to the lodge. Dinner and overnight in the Serengeti Katikati Tented Camp

We do an after breakfast game viewing drive along the Sogore River Circuit, which loops into the plains south of the Seronera River, and which is good for possible Lion, Thomson gazelle, Topi, ostrich and cheetah sightings. The Visitor Centre close to the Serengeti Seronera Lodge and public Campsites is well worth a visit after the morning’s game drive. This nicely designed centre offers some interesting wildlife displays as well as a gift shop selling information leaflets and maps of the area. The centre also has a shop where cold drinks and snacks can be purchased, as well as a picnic area and information trail up and around a nearby kopje. We will enjoy a relaxed picnic lunch at the centre in the shade of the giant acacia trees. In the afternoon we will follow the Kopjes Circuit, which goes anti-clockwise around the Maasai Kopjes, which usually attract a number of lion and some formidably large cobras. Kopjes are weathered granite outcrops, scattered around the plains, most of which are miniature ecosystems, providing shade and drinking water in pools left in the rock after the rains. This makes the kopjes particularly good for spotting wildlife in the dry seasons – including lions, which like to lie in wait for animals coming to drink! Dinner and overnight in the Serengeti Katikati Tented Camp

After breakfast we head to the south-eastern side of the park, visiting the Barafu Kopjes and the Ngare Nanyuki River area, for our morning and afternoon game drives. Apart from the lion prides you find in the area, the Barafu Kopjes is the place to visit for possible cheetah sightings. The Ngare Nanyuki River area is also well known for being packed with game. Dinner and overnight in the Serengeti Katikati Tented Camp

Today is our last day in the Serengeti National Park. We will once again visit some kopjes on our way out of the park and will do a morning game drive in the Simba Kopjes area. The kopjes are named after the lions, which frequently use these kopjes to just lie and bath in the sun. You may also see baboon, giraffe and some interesting birds in this area. From here we will head to Lake Ndutu, which is alkaline, like most of the other Rift lakes, however still drinkable and used by a wide array of local wildlife. We will do an afternoon game drive in the lake area, which offers quite a change from the vast open plains of the Serengeti. The area is usually heavy populated with elephant and birds as well as resident plains game. The Ndutu Lodge is a charming small safari lodge, which is used as a base by many wildlife film crews. Dinner and overnight at Ndutu Safari Lodge

We depart after breakfast from Lake Ndutu for a morning game drive in the Naabi Hill area before we head towards the Ngorongoro Crater via the famed Olduvai Gorge , also known as “the cradle of mankind”. The Gorge lies on the site of an ancient lake, covered by thick layers of volcanic ash, which carefully preserved the world’s earliest records of mankind and which was unearthed by the dedicated Leakey family. The museum displays some of these fascinating discoveries and remarkable finds. From here we head for the magnificent Ngorongoro Crater , one of the most densely crowded game areas in the world, which is home to an estimated 30,000 animals, we arrive in time for lunch at the lodge and spend the afternoon at leisure. Dinner and overnight on the Ngorongoro Rhino Lodge

After an early breakfast we descend 600m into this stunning crater to view wildlife for a full-day’s tour. You will witness an unforgettable spectacle of African wildlife – a world teeming with animals. Supported by a year round water supply and fodder, the park supports a vast variety of animals, which include herds of wildebeest, zebra, buffalo, eland, warthog, hippo, giant elephants and a small population of black rhino. Another big draw to this picturesque park is it dense population of predators, which include lions, hyenas, jackals, cheetahs and the ever elusive leopard, which sometimes requires a trained eye to spot. We will return to the lodge for lunch and spend the afternoon at leisure. Dinner and overnight on the Ngorongoro Rhino Lodge